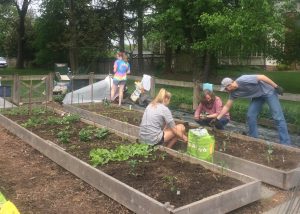 Genesis 2:15 states:”The Lord God took the man and put him in the Garden of Eden to work it and take care of it.”

I must confess that in spite of the fact that my mother was the founder of the Wiltondale Garden Club, I am probably the most unlikely person to be talking about the IGG—Intergenerational Garden. I am not a gardener nor have I ever been one. My home property was professionally landscaped with shrubs. My attempt at growing tomatoes never produced anything edible.
When I heard about the garden, I didn’t even know where it was located or what IGG stood for. What I did know was that it provided fresh, healthy, locally grown vegetables to the Assistance Center of Towson Churches (ACTC) for members of our community who may otherwise not have access. I wanted to be a part of this ministry.

Not having a clue as to what was involved, I figured I could hold a hose and walk among the plants, providing the water that would bring to life the seeds and promote the growth of the food. After all, what is there to unraveling a hose, turning on a faucet, and walking up and down the garden aisles.

What I didn’t expect was the incredible and amazing spiritual and educational adventure I was embarking upon. Along with a team of dedicated and knowledgeable gardeners, especially John Sheehan, chief harvester; Madeleine Mysko, chief vegetable washer/packer, and organized by Carol Appleby, almost 200 volunteer hours were given. I became one of the critical cogs in the Circle of Life that was taking place in the plot of land. Seeds and seedlings had been carefully planted in the womb of dirt, thirsting for the water that would nurture their growth.

Being a non-gardener, I had never actually seen how broccoli grows, or that squash has huge, bright yellow flowers before it forms the gourd, and that their stalks crawl across the ground like creatures from a science fiction movie. I learned why peppers are called “bell peppers” as they hung like bells from the vines. My only encounter with growing beans was from a storybook.

Twice a week, from April through September, for about an hour and a half, I had the privilege of nurturing these plants and learning from them as well. I even took the opportunity to bring Sawyer, my 13 year old grandson, to the garden several times so that he could see the progression of the lives of these plants.

And as it is with the Circle of Life, there came a time when the plants were no longer productive, no matter how much water I gave them. And I showed my grandson that within the vegetables, there were seeds for the next generation to be planted next year and that we were witnesses to God’s creation. This year we made 50 deliveries totaling 300lbs. of vegetable to ACTC between May and November 4.

There were other benefits I was blessed with while tending to the garden. The surrounding garden of flowers added such beauty that passers-by, mainly dog walkers, would stop and make comments or ask questions. My Epiphany Star is the word TELL. I seized the opportunity to do some evangelism, telling them about the purpose of the garden and the other wonderful opportunities for ministry and spiritual growth offered by Towson Presbyterian Church and ACTC. I made sure to include the magnificence of the music program and the thought- provoking and relevant sermons unaware that the garden was a church ministry nor were they aware of the Assistance Center of Towson Churches-ACTC and its mission. Next year be sure to include that we are inclusive, curious, compassionate and courageous.

Others of God’s creatures were among the visitors as well. I was greeted regularly during my afternoon sessions by mosquitoes seeing me as their source of sustenance only to be discouraged by my insect repellent. Occasionally there was a rabbit who would sit and watch, hoping I might leave the garden gate open. In late summer, the butterflies would perch on the flowers and suck the nectar resulting in some great photo ops. Tiny red insects clustered and nibbled on the flower seedpods. Helped by the wind, a final good-by ballet was performed by the milkweed seeds as their white fluffy strands floated a seed to a new destination, a rebirth for another generation. So hope you can see how important and fulfilling a simple task of watering the garden can be. How God’s presence can be felt through the nurturing of all aspects of his creation

So  hope you can see how important and fulfilling a simple task of watering the garden can be. How God’s presence can be felt through the nurturing of all aspects of his creation.

I have been generously reimbursed.