Prior to the pandemic, the Worship, Music, & Arts Committee requested Session explore updating the sanctuary’s audio and visual capabilities.  The committee was frustrated by our church’s current capability of showing slides/videos during worship, which requires a portable, large screen to be pulled up and then down during the service (as it blocks the choir when it’s up).  Essentially, the equipment was/is so cumbersome, we weren’t utilizing video really at all (e.g. for Moments for Mission, video announcements, the occasional sermon illustration).

Accordingly, a task force was formed to research the project.  The original inception explored the use of an automated screen that would be hung from the front of the sanctuary (and be automatically lowered and raised at appropriate times in the service).  This would require an LED projector to be hung from the rafters to project the display on the screen.

Unfortunately, this first option proved untenable for a number of reasons—the biggest of which was that the only way to get a screen large enough for all to see it would require mounting it in the very center of the rafters in front of the cross and all of the organ pipes.  The notion of blocking the cross and pipes with such a tremendously large screen sent the team back to the drawing board.

It was then that the idea of using smaller screens developed, as the group began exploring the possibility of mounting flat screen monitors in a similar position as the sanctuary’s current speakers; specifically, the screens will be mounted where the ceiling truss meets the wall, angled down and out about 45 degrees.  Mounted as discretely as possible, Session believes this proposal offers a less obtrusive solution than a center mounted, automated screen.

It was also during this time that the pandemic struck, revealing the crucial role that livestreaming will play in the church’s worshipping future.  As such, Session invited the task force to further explore the cost of equipping the sanctuary with cameras and professional livestreaming equipment to best facilitate as rich of a livestreamed worshipping experience as we possibly can.

Below are visualizations of how the screens will appear in the sanctuary.

Please note, however, that the screens are not perfectly to scale.  They will also be installed slightly higher and angled towards the rear more than pictured. 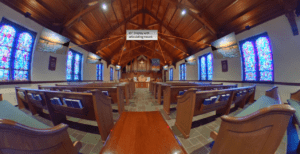 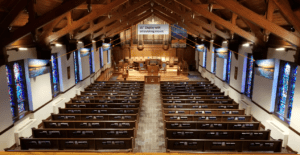 Below are key pieces of the equipment to be installed: 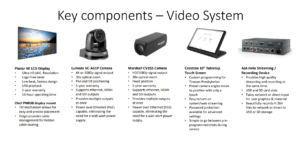 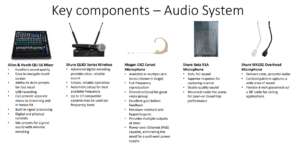